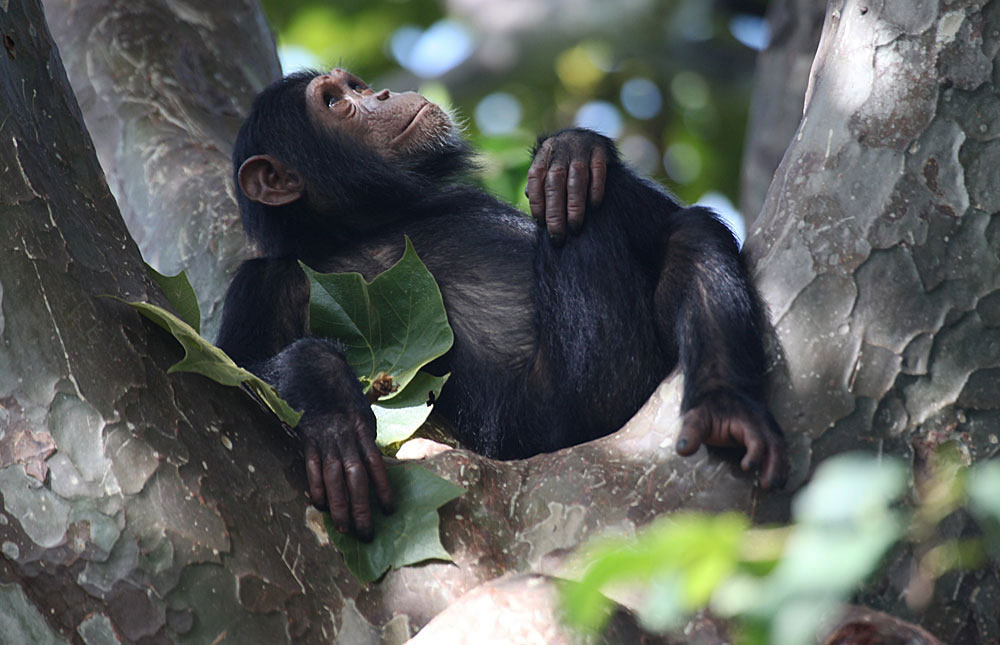 Gombe Stream is Tanzania’s smallest park (52 sq km) and is home of the world famous chimp reserve. It is located 16 km north of Kigoma on the shore of Lake Tanganyika in the western Tanzania.

There are plenty of baboons around, but the focal point of Gombe is the chimps. It’s reconciling their interests with those of tourism that has occupied the founder of the Reserve, Jane Goodall, for 25 years. Here, in the 1960’s, Goodall carried out major research on the unique relationship between man and chimpanzee, as we share 95% of our genes with them (some people may share more than others!) and they have similar hearing, smells and other senses to humans.

You need to pay $100 a day just to come (entrance fee), whether you see the chimps or not, so be prepared; you may be disappointed. Some of the chimpanzees in the main study community are actually quite aggressive to strangers, so it can be dangerous. Care has to be taken not to pass on diseases to the chimps, as humans and chimps immunity systems are so similar that we can catch their diseases and the vice versa.

Habituating the chimps – getting them used and coping with people, involves living in the middle of dense jungle, often alone, and under trying conditions. Despite all these, the biggest threat to the chimps still comes from humans. In places like Saudi Arabia and Dubai it’s the thing to have a little collection of exotic animals and you must have a chimp. And some chimps get smuggled through into east Europe or Mexico or Cuba or South America for medical research or for entertainment. The Goodall Institute offer rewards to anyone who gives evidence of people who are abusing chimps. Because of rapid habitat destruction, the chimpanzee is termed as an endangered species following the guidelines of the International Union for Nature Conservation. Only around 100,000 – 200,000 exist in the wild.

Chimpanzees eat plants and meat; they are omnivores, eating forest fruits and ants, termites and small animals, and occasionally other smaller monkeys. They hang around in groups of around 50, and smaller sub-gangs of 7 or 8 chimps. They use a complex language of sounds; the calls of the chimps are always in the air of the Gombe Reserve, so you can be in the presence of the great monkeys even if you don’t have a chance to see a wild chimp up close. Finding the chimps is largely a matter of luck as they can theoretically be anywhere from the top of the 8000 ft mountains to the lakeshore at 2500 ft. However, the trackers at the camp know the animals well and are nearly always in touch with their movements from day to day.

The length of walk can vary enormously – they are sometimes literally at the back of the camp and other days they are nowhere to be seen – but on average you should expect to walk for at least 2-3 hours. If you fail to spot a wild chimp, don’t get too disheartened, the landscape, flora and fauna are fantastic in and around the Reserve. From Jane’s Peak you can see a stunning view of the entire Park and Kakombe Waterfall.

How to get there
Kigoma is connected to Dar and Arusha by scheduled flights, to Dar and Mwanza by a slow railway service, to Dar, Mwanza, and Mbeya by rough dirt roads, and to Mpulugu in Zambia by a weekly ferry.
From Kigoma, local lake-taxis take up to three hours to reach Gombe, or motorboats can be chartered, taking less than one hour.

When to go
The chimps don’t roam as far in the wet season, February-June. November-mid December may be easier to find, better picture opportunities in the dry, July-October and late December.