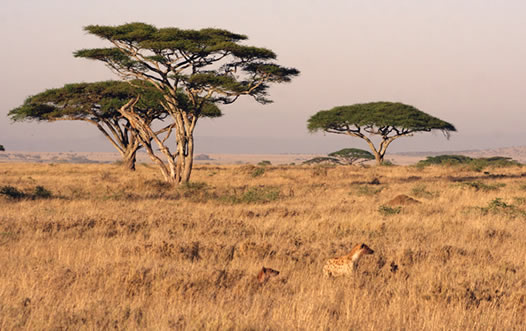 Until recently, the Reserve was only accessible by plane or by train. However, with an improvement to the road network, the area is now accessible to everyone. The concentrations of wildlife in the Selous are understandably huge. The Selous, named after a German explorer and author, boasts Tanzania’s largest population of elephants – currently about 10,000 animals – as well as some of Africa’s largest numbers of Buffalo, Hippos, and Nile crocodiles and Wild dogs.

Other species commonly seen are lion, bushbuck, impala, giraffe, eland, baboon, zebra and greater kudu. The Selous also contains one of the few viable populations of black rhinos in the world, with between 150 and 200 individual animals. The Reserve also contains more than 350 different bird species and 2,000 different species of plants. The Selous Game Reserve was designated a UNESCO World Heritage site in 1983 due to its unique ecological importance.

The Rufiji River and its tributaries, lined by Barrassus Palms, shape the landscape and it is the heart of the park. The Rufiji swells through the park down to the Indian Ocean forming a series of small lakes that serves as an important source of water for the multitude of the plains game.
It is only in the Selous Game Reserve that one can combine game drives, boat tours and walking safaris. The hinterland around Lake Tagalala and Beho is one of the most picturesque in area.

When to Go
The most pleasant time to visit the Selous is during the cool season from the end of June until October. The rainy season is from November to May. There is a drier spell in January and February, and this is also a beautiful time to visit, as the trees and flowers are blossoming and everywhere the vegetation is green. During the heavy rains, normally from the end of March to May, the Reserve is inaccessible and the tourist camps are closed.